One of the crucial task of a Visual Effects supervisor on set is to shot spherical degree high dynamic range (HDR) panoramas. Those panoramas can be very useful in post production as a source of light or just a good reference for computer generated environments. This article  goes through all the steps required to create basic HDRIs.

Reasons to do on set HDRI capture

Level your tripod as shown on the Figure 2.

Nodal Ninja purpose is to take parallax free images to make it suitable for stitching in one continues panorama later on.

As a professional you have to be consistent with your results. That why it is very important to have a clearly defined procedure in place. This video will explain what to check before shooting  and how to properly shoot HDRIs

Assuming that you use 8 mm lens on full frame camera. You have to end up with overlapping pictures for each direction

Depending on your goal you can shoot between 3-5 pictures for each direction with 1 or 2 f-stop difference.

It is a good practice to shoot a slate for every panorama that you shooting. The reason for that is when you stiching your photos it might be difficult to find where is one sequence ends and another begins. An example of a slate by using a smartphone illustrated on the Figure 5.

Slate for each panorama should include:

I would recommend PTGui for stitching your images. It does fantastic job combining multiple exposure Canon RAW images and then stitching it together.
If you did not messed up alignment or image exposure along the way this process should be automatic.

I decided to record a series of interviews dedicated to people living and working abroad in California. This interview is with my good friend, artist and developer Sergii Dumyk. I met him under unexpected circumstances and since then follow his unusual way of exploring San Francisco.

Everyone who ever worked on integration of computer generated (CG) image over a life action video knows unpremult/premult workflow. The main ruke is before applying any color corrections to CG render it must be divided by alpha channel (unmultiplied). The whole thing about pre-multiplication and transparency is quite simple.

The problem occur when you get footage which is already premultiplied and you multiply your RGB channel by Alfa again. In fact that exactly what happening when you try to use some footage with Alfa channel as transparency in Maya.

If you think your image is Unpremultiplied (but it’s really Premultiplied) and you add a Premult node you basically multiply the image twice (RGB x Alpha x Alpha). If you have an RGB pixel of 0.6 and you multiply it by the alpha pixel of 0.4 you get a correct value of 0.24 for that RGB pixel. But if you premultiply the image twice you are effectively doing 0.6 x 0.4 x 0.4 giving you a value of 0.096, which darkens the edge.

There are situations when you will want to Unpremultiply an image. The general rule for any form of colour correction is: Unpremult the image first, do the colour correction and then Premult back to its correct state. This is so you don’t accidentally colour correct any of the transparent Alpha edges. [2]

The task is to execute a function with a callback multiple times but each time I want to pass my loop ‘item’ variable to the callback function.

This is the code output

We can see that item gets logged immediately 3 times but callback returned 100 ms later when the item was on its last value which is 3. How can we male callback aware of current loop iteration?

We can do that by cloning the value of ‘item’ variable into the scope of another function which can not be altered from higher level.

The following example demonstrate the concept of local and global scope

The other very important moment to understand is that function can return another function. Please consider the following example.

Notice how value 2 gets saved inside of addTwo object scope. This might be used to solve our original callback problem.

Let’s wrap our setTimeout into another function. By doing so we will crate function closure and create new object with our ‘item’ value for every iteration of the loop.

Now we calling setTimer asynchronously and preserving the ‘item’ value to print it later to the console.

Linear workflow is the subjects of a lot of mysteries. Indeed, it is convoluted an hard to understand especially if there are multiple ways to achieve similar but not the same result.
Linear workflow mean that all your images going trough the pipiline in linear color space. For example render output from Maya in linear space go to Nuke where get processed and render to final delivery format in sRGB.
In this article I want to show my observation end experiments that I’ve done with V-Ray and Maya and how at firs glance similar things  can produce quite different result.

The most important thing to know is that all of the renders perform calculation with linear colors, thus all the sources supplied, such as texture images, has to be linear. People often forget that shaders also need to be supplied with linear images.

Most of the source files (.jpg, png, tif, etc.) used as textures have non-linear gamma (2.2) applied to it.

Majority of render engines perform texture filtering in two places. First, when a shader process a texture, second, when the render engine calculating the image (anti-aliasing). As a matter of fact, we want to convert our images before shader start to perform its calculations, otherwise when it come to applying filtering the math will be wrong.

When you select you gamma conversion in application there are usually a couple choices sRGB and Gamma 2.2. This color spaces have slightly different curve which probably will be undistingvishble.  Here is an example of two overlapping curve taken from Nuke LUT Settings. 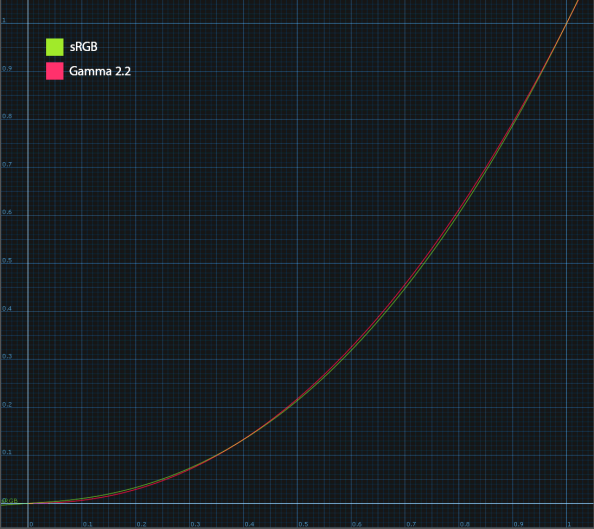 My test set up include two texture images. One texture used as is with gamma 2.2 color space, another was converted to linear by using Nuke Colorspace node. 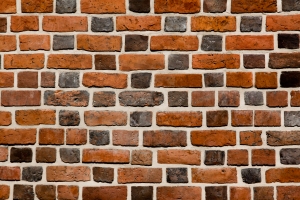 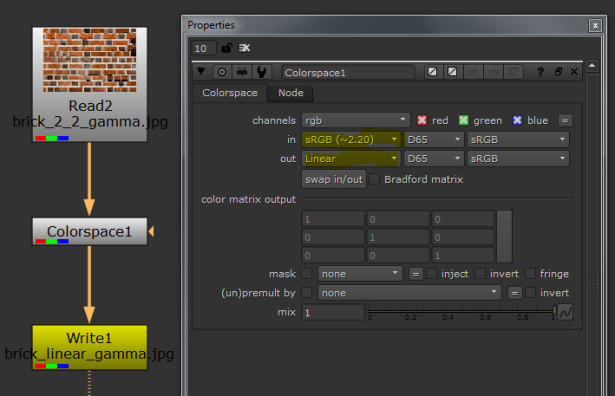 First I went and disabled all of the filtering on texture as well as in render settings in order to get clean more predictable result. In term of linear workflow I’ve been testing the following cases: 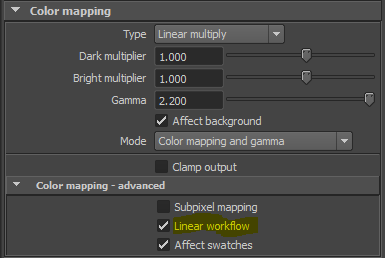 The following image demonstrate the difference between Linear Workflow Toggle and on texture gamma correction. One main thing to note here that image corrected with VRay Extra Attribute (Case 2) has now difference with linear image without any correction (Case 3). On the other hand, image witch rendered with linear workflow toggle on has noticeable degradation in dark colors.

Most likely degradation happening due to filtering process that happening when texture get process by shader. By specifying texture input gamma on shader VRay can interpret texture to linear work space before doing the actual calculation. In case when linear workflow is turned on in render settings the texture gets filtered with non-linear gamma which lead to some errors in shader math and only after that render convert the texture to linear work space and perform further calculations.

This article was inspired by the great tutorial from Alexey Mazurenko. Unfortunately only available in Russian.
https://vimeo.com/53806660

Fabulus paper from siggraph about RENDERMAN

What Ri spec newer told you

Overriding materials in Houdini  not a simple task that you might think. There are many ways to do so such as Takes or shop_surfacepath method mention here (http://forums.odforce.net/topic/13385-global-material-override/)

Python Filtering technic described in the same post by King Tapir work pretty well and do not required that all of your material assigned on the object level. However, it might be difficult to figure out how to use it for the first time.

Made a .py file. In my case it called filter.py and contain following code.

Tell mantra to use this file as a Python Filter

Also, don’t forget to force writing of all shaders into .idf by setting Declare All SHOPs. 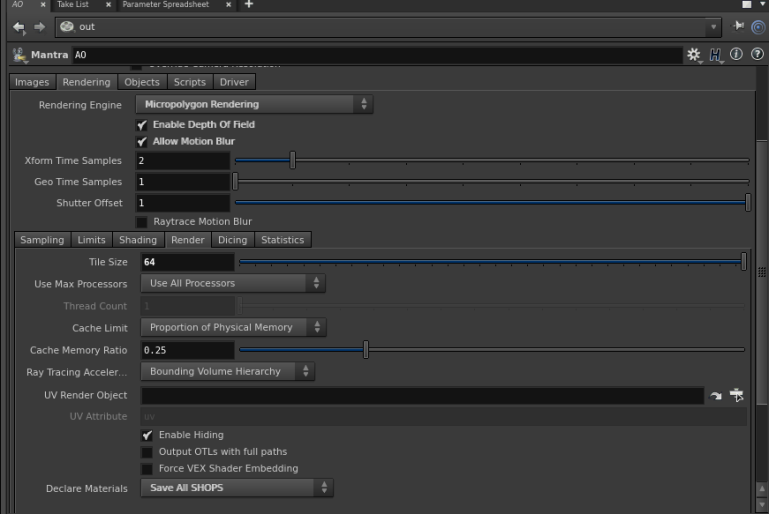 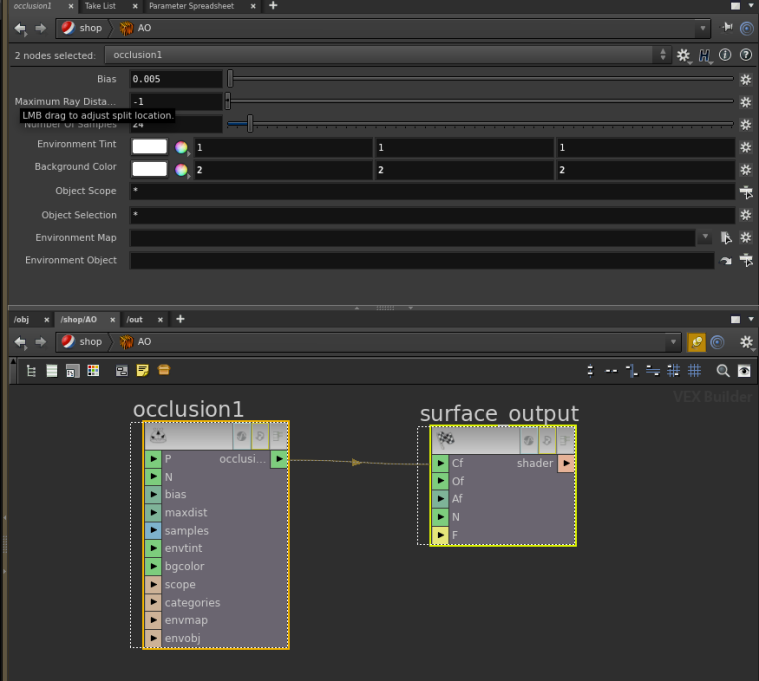 If everything set correctly you should see the print output “Python Filter Finished” in your console.

This is my result

The fact that Houdini convert any comercial scene to non-commercial the moment you past any hipc content was bothering me for a long time. My school has an educational license of Houdini which works without any limitation within the school network. But often I want to reuse my asset created in school for other projects, however an attempt to do so transform my .hip file into apprentice version with all of the limitations applied.

opscript command that allows you to dump any Houdini scene to a text file in Hscript format.

cmdread command allows you to execute Hscript commands from a file.

Here is a simple example of usage.

In a non-comercial scene:

And when in a new commercial scene to load generated file.

Some people asked me for more detailed description of how to convert files. Here is step by step guide.

4. Press Enter. That command should dump your scene to $TEMP/temp.cmd text file.

Good advise from this fellow

Just stumble across this thread

It took me some time to figure it out because standard “hexpand” utility doesn’t quite work on Windows. I also fail to solve “Permission denied” error discoursed in the thread.

Here is the command.

KiKo
Create a free website or blog at WordPress.com.